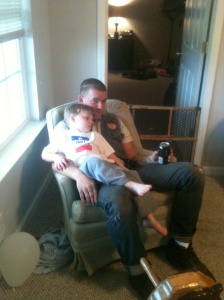 When I heard the news that Joey was killed, it felt as if the bottom had fallen out of my sense of reality. My brain couldn’t cope with a world in which my brother wasn’t out there making stuff happen. It just didn’t make sense. I felt a profound sense of loss, but it was more loss of clarity than the loss of his presence at first.

Joe had been living in Austin for the last two years, and I had seen him rarely over that time, though we talked on the phone and texted a bit and kept up with one another on Facebook. He had been home to Nashville just a month before to celebrate my oldest son’s third birthday and visit with family and friends for a few days, and looking back I’m so grateful for those days, though I would have made that hug goodbye last a bit longer had I known it would be my final goodbye.

We didn’t really talk about anything important, mostly we just enjoyed one another’s presence, and I think I saw a look of approval and even pride as he surveyed my little family and the way we interacted. Noah, the birthday boy, stuck to Uncle Joe like glue, following him around and asking him, “Want to sit in my lap?” (meaning of course that Noah wanted to sit in his lap). Joe just grinned his lopsided grin as he pulled him up in the chair each time, and my heart melted at the bond they shared.

Then just over a month later, he was gone. Not just gone from my house, but gone from this earth. Gone, and I’d get no more chances to hug his neck, to show him how big my boys had grown, to hear what adventures he was off to next, to tell him how proud I have always been to be his sister. GONE.

As I said, my brain just couldn’t grasp this new reality. I tended to the arrangements of his memorial service, collecting photos, connecting with his friends across the country and even around the world, writing my remembrances to share at the service, and all the time pushing away the thoughts of why I was doing this. I got a memorial tattoo; we celebrated his life at our church, and again at a benefit/memorial concert given by his friends; I divided his ashes into small vials for many of his friends to scatter across the globe. And then suddenly it would hit me: I’m doing all of this for Joey, but he isn’t here.

My heart is broken, shattered like glass on the road where Joey’s life was taken by a reckless driver, a coward who didn’t even stick around to see the damage he caused. How could some total stranger tear such a hole in my life?

And yet, I do have hope. I believe in God, in His son Jesus Christ who lived, died and rose again. I believe that Joey knew Jesus however far he may have seemed to live from that relationship, and that his spirit now lives in Heaven. I believe this, and yet, at first, my brain could not reconcile my image of Joey with my “churchified” vision of heaven. I knew my brother could never find joy in a place that felt as conformist as church. So then, what must heaven be? Paul said that to be absent from the body was to be present with the Lord, and when I think of who Jesus is – God/Love in the flesh – all the constraints fall away.

Joe’s neck tattoo said “NEVER BETRAY” (not Never Bet Ray, as he might have let you believe), and it was his motto. It was written backwards so that he could read it in the mirror because it never was for you, it was for him. Never pretend to be anything you’re not in order to make money or friends. Be true to you, and you’ll be free. Isn’t that what LOVE is? True love says, I love you for who you are not what you do. That is the love of God, the love Jesus taught us to extend to one another. If being in Heaven is to be in the presence of LOVE, then where else would Joey belong? He is gone, but he lives on.